Reigate Business Guild has continued its annual tradition of putting out flags for St George’s Day – but with an added message this year thanking key workers.

Jes Chandler, chairman of the guild, said that he had thought long and hard about whether it was right to put out flags this year, but decided to go ahead.

“It gives the town some colour, shows our appreciation to all of the people who are putting themselves at risk, and recognises our national day”, he said.

To get hold of suitable flags, he contacted a company that was already manufacturing Union Jacks saying “Thank you NHS”, and asked them if they could produce some one-off St George’s versions, along with others that would say “Thank you key workers”.

Once artwork was agreed and the flags made, Mr Chandler put them up around the town on St George’s Day (Thursday 23 April), along with James Robertson and Chris Brill, two employees at his firm Stanton Construction, and guild member Bruce Chapman.

Social distancing requirements meant that not as many flags could go up as usual.

“We would normally add flags to the cross-street catenary wires but this was not possible as it requires two people in a cherry picker basket at close proximity”, Mr Chandler said.

He added that there had been an “amazing amount of support” for the initiative.

A post on the Guild’s Facebook page showing the flags around the town centre has been widely shared and liked.

The aim is to leave the flags up for a week or so.

Reigate Business Guild was established in 1991 and has around a hundred members, ranging from large corporates to sole traders. New members are welcome.

The guild’s flagship event is the Reigate Christmas Fayre held in early December, which also hosts the annual Christmas lights switch-on. The guild’s volunteers fundraise for the lights during the year. 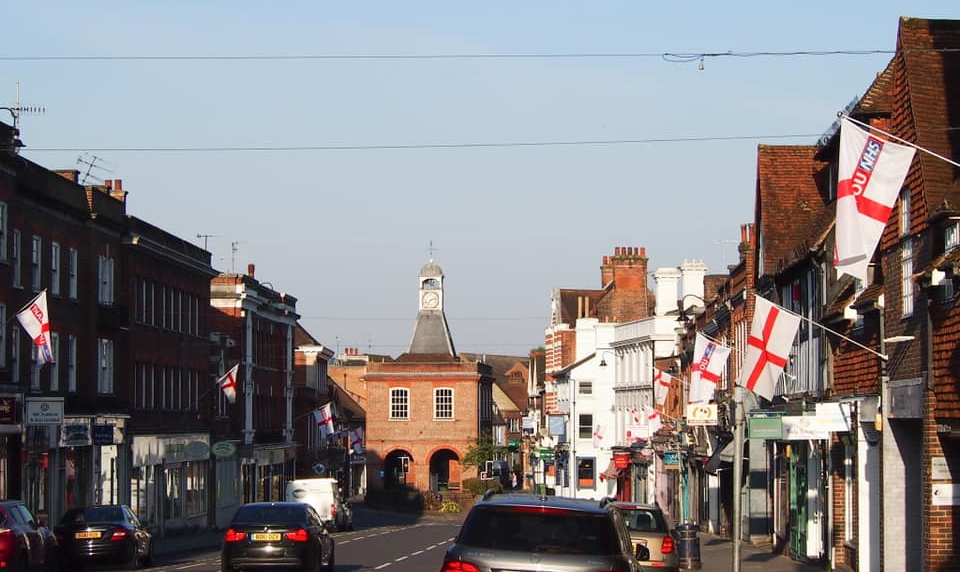